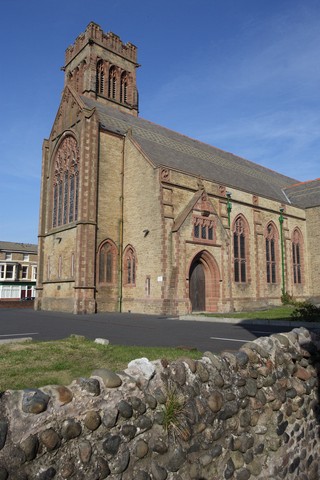 Holy Trinity is in the South Shore area of Blackpool, it is close to the promenade by South Pier. This map shows how to find us, this page can also be used to generate directions from anywhere in the UK.

It is known that the first Church dedicated to the Holy Trinity was built in 1836 on the present site. The first church is described as "a modest building" of an early English type, nestling among the sandhills with long lancet windows, high square pews and deep West gallery. The building accommodated about two hundred and fifty people.

In 1846 the church was altered with the addition of short transepts and a chancel. Then in 1886 the Diocesan Architects declared the roof beams unsafe. Leading up to this there had been much discussion about extending the church to meet the needs of the growing population. A public meeting was held and it was decided the best course of action was to build a new Church in stages. In June 1888 the foundation stones for the new church were laid. Work continued and in July 1894 the foundation stone of the Nave and Tower was laid. The completed building was opened on the 27th November 1895. The total cost of the church was Â£14,000; this great sum (at that time) was raised mainly through the generosity of parishioners. The original foundation stone remains and can be seen inside the Church above the main doorway.

The church is a Grade 2 listed building and is one of the finest examples of ecclesiastical architecture in the town. The length of the church, including the chancel is 152ft (46.3m), the width at the transepts 80ft (24.4m), and the seating capacity with the gallery over 1000. William Hill & Son built the present organ in 1903 and is a "reduced scale" cathedral organ reflecting the size of the building.

The Grade 2 listed status of the building comes from the two large windows in the South Transept; these can be seen in the photo looking across the sanctuary. The idea embodied in the East window is the building of the Temple of God. The lower lights represent the dedication of Solomon?s Temple (II Chronicles, 6). The middle lights are figures of the four men associated with English Church building; St Edmund the Confessor (Westminster Abbey); William the Englishman (Canterbury Cathedral); William of Wykeham (Winchester and New College, Oxford); and Sir Christopher Wren (St. Paul's Cathedral). The upper lights represent the Holy City, the New Jerusalem. The West window shows the idea of the Temple and Church music. The lower lights show David bringing up the Ark of God from the House of Obededom to the City of David. In the middle lights four of the great Church musicians are shown; St Gregory, whose name is associated with bringing music to the Psalms in the Christian Church; St Dunstan, the first Anglican builder of organs; Marbeck, a great composer; and Purcell another great composer of the Wren period. The upper section represents the Adoration of the Heavenly Host.

There are many other beautiful stained glass windows in the Church, the ones in the South Nave have an interesting story. They depict the four Evangelists (Matthew, Mark, Luke and John) and were originally in Rawcliffe Street Methodist Church. The last service was held there on the 25th July 1971, and in 1972 the church was demolished. Fortunately, these windows were saved from destruction and given to the Church by our Methodist friends.

The Lady Chapel on the South Side of the chancel is dedicated to the memory of the Reverend A. L. Burgess, Curate of the Parish. He was killed in a motor accident in 1911 returning from the Coronation of King George V, after a devoted ministry of four years. It is a simple, beautiful haven of tranquillity and seats around sixty.

An inspection by the Diocesan Architects in 2005 highlighted a lot of work that needed completing urgently to maintain the building for the future. In addition to the maintenance work the opportunity to re-order the church to make the space more useful and relevant to the local community was undertaken. In 2006, after all the planning and having received grants and donations, work began. First a new car park was laid. Internally, at the back of the church, the Childrenâs Corner made way for a kitchen and new toilets, including one for the disabled. All the pews were removed and the nave furnished with chairs. A glass pod, framed in American Oak was built at the back of the church, this has a false ceiling with lights. There is also a small Heritage Centre at the back. The pod is now an excellent place for meetings. The font was removed from the old Childrenâs Corner and is now at the front of the church.

With grants from English Heritage, Historic Churches Trust and other funding, Phase I included the replacement of the north transept windows, exterior stonework, guttering and roof repairs. Due to movement caused by the flagpole in strong winds, a crack had appeared in the tower and the top of the structure had to be rebuilt and a new tower roof added. There was major dry rot work to tackle and for a week the organ remained covered to avoid dust damage. The gallery was also closed.

In January 2010 Phase II with a further grant from English Heritage of the work began with removal of the north and south aisle ceilings for dry rot work and work on the stonework and traceries done. Then in 2014 a further English Heritage grant allowed work to begin on Phase III which involved conservation of the stonework in the South Transept windows and restoration of the stained glass. This was completed in the early summer of 2015 and we are now planning to start Phase IV which includes conservation of the tower stonework and some internal work with a grant from Historic England (previously known as English Heritage).

The church is extremely grateful to have benefited from the financial support from Historic England and all the other organisations and individuals over the last ten years which has enabled the church building to be secured for the current and future generations.

Some photos of the church taken in 2005 before the reordering can be seen on this page.